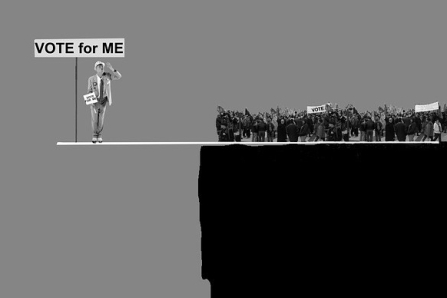 I do my civic duty by voting faithfully in all elections, even those small town ones where there is only one candidate for dogcatcher or cemetery commissioner.  I vote for that one person because, seriously, I admire anyone who is willing to stand up and make our town a better place by making sure dogs don’t mosey around and use my lawn to do their business, or more important make sure the dead stay buried.  (Anyone who lives in a small town knows that keeping control of the skeletons is a very important job.)

But, please don’t start talking to me about formal procedures.  Just hearing the phrase  “Robert’s Rules of Order,” makes me break out in hives and my heart rate accelerate to a dangerous level.  This caused a problem when I agreed to be president of my religious organization because now I have to run the board meetings.  I’m proud to say that I’ve learned to ask for a motion, a second and a vote on all the important issues, but I’m still pretty sure that Robert is turning in his grave.  (I’ll call the cemetery commissioner in the morning!)

Honest disclosure:  I do not often attend town meetings, committee hearings, local political conventions, and so on.  I admire people who do and feel appropriately guilty because I do not do so.  It’s on my list of things I should change about myself, but that list is so long that attending these meetings didn’t even make it to the top ten.

Back when my children were still in school, I did go to a very important town meeting about building a new middle school building and the taxes that would be necessary to fund it.  I probably would have weaseled out of that meeting too, but my 80+ year old mother said that by-god she was going because it involved her grandchildren’s future.  If I hadn’t driven her there, she probably would have walked the mile to the town hall and how would that have looked to all my nosy neighbors?

The best meeting that I attended, though, was way back when I first moved to town and was full of excitement about making myself an important resident, committed to the town’s well-being and willing to sacrifice my time and energy to help out.  I don’t remember the subject being discussed that night, but clearly it was of critical importance because it was well-attended and had to be held in a different building to accommodate the crowd.

The meeting was long and contentious, and people were starting to get cranky.  In the tradition of legalese and governmental obfuscation, the item being voted on was phrased in such a way that it was difficult to know which  way to vote.  Finally, one very exasperated old-timer stood up and yelled out:

That about sums it up for me.

7 thoughts on “Please Take My Place!”